It’s time that we cut the fat and start to become a more efficient society. This is just one of the many habits we see with our governments of the day. They’re all operating from a state of survival of the fittest. They feel that their military is threatened if we start to trim the fat off of the military budget.

On the contrary though; it would make us much more efficient. What we have in today’s society is the lack of understanding on how to use our resources. We consume with very little consideration as to what our consumption does to the planet, environment and ourselves. We waste so much nowadays; society is build around consumerism; consumerism is unsustainable because of the fact it must keep consuming or else it will collapse.

Products are designed and built to keep the machine going; there is a industry term called Planned Obsolescence which is the deliberate act of designing products to breakdown over time. Wikipedia states it as products with artificially limited useful life. Meaning they’re designed to degrade over time. This is in an attempt to encourage people to buy another one. Consumerism can only survive if people buy their products; thus if we were to design products that would last for a very long time; businesses would go bankrupt and there wouldn’t be as many sales for products.

Because of this we have so much wasteful spending and poor management over resources. We have the capacity to not only become more efficient with our natural resources; but also to create paradise on earth. Nikola Tesla discovered free energy over 70 years ago; which has been utilized in isolated sections of society to create self sufficient communities.

This is the type of behavior that we must address in these times. The way we handle things right now are the very reason we’re in such a dire situation. It is time to reform society, it is time to take models of different societal structures seriously. For example; Jacque Fresco with The Venus Project has designed a beautiful community around the concept of wise management of our resources.

Then we also have Michael Tellinger who has created the Ubuntu Community which seeks to give abundance and prosperity to humanity through smart management and self sufficiency.

It is time we buckle down and face the facts. The facts for many will be hard to accept; but the sooner we do, the sooner we can move on to a better society. It is time for real authentic change; we are the change and change has finally arrived.

(ZHE) The Pentagon’s goal was simple, empower the Defense Business Board (DBB), a federal advisory panel of corporate executives, to retain consultants to identify potential cost savings in the Department of Defense’s $580 billion budget. But, when the DBB study revealed a “clear path to saving over $125 billion,” a level of waste which spoke to the egregious mismanagement and incompetence of DoD leaders, it was clear something had to be done to bury the story. Now, according to the Washington Post, that is exactly what happened.

The Pentagon has buried an internal study that exposed $125 billion in administrative waste in its business operations amid fears Congress would use the findings as an excuse to slash the defense budget, according to interviews and confidential memos obtained by The Washington Post.

Pentagon leaders had requested the study to help make their enormous back-office bureaucracy more efficient and reinvest any savings in combat power. But after the project documented far more wasteful spending than expected, senior defense officials moved swiftly to kill it by discrediting and suppressing the results.

The report, issued in January 2015, identified “a clear path” for the Defense Department to save $125 billion over five years. The plan would not have required layoffs of civil servants or reductions in military personnel. Instead, it would have streamlined the bureaucracy through attrition and early retirements, curtailed high-priced contractors and made better use of information technology.

The data further showed that the Defense Department was paying a staggering number of people — 1,014,000 contractors, civilians and uniformed personnel — to fill back-office jobs far from the front lines. That workforce supports 1.3 million troops on active duty, the fewest since 1940.

Pentagon officials had hoped to use the cost-cutting report to identify opportunities to eliminate “waste” that could be converted to direct spending for troops and weapons. But when the report highlighted too much waste, senior officials grew concerned that Congress might attempt to reduce their budget instead. So, they did what any bloated, corrupt government organization would do when faced with the same choice…they made everyone sign confidentiality agreements promising to never speak of the study and removed all copies of the report from public websites.

For the military, the major allure of the study was that it called for reallocating the $125 billion for troops and weapons. Among other options, the savings could have paid a large portion of the bill to rebuild the nation’s aging nuclear arsenal, or the operating expenses for 50 Army brigades.

But some Pentagon leaders said they fretted that by spotlighting so much waste, the study would undermine their repeated public assertions that years of budget austerity had left the armed forces starved of funds. Instead of providing more money, they said, they worried Congress and the White House might decide to cut deeper.

So the plan was killed. The Pentagon imposed secrecy restrictions on the data making up the study, which ensured no one could replicate the findings. A 77-page summary report that had been made public was removed from a Pentagon website.

Now that the cat’s out of the bag, Pentagon officials have no choice but to discredit the study at all costs.

After the board finished its analysis, however, Work changed his position. In an interview with The Post, he did not dispute the board’s findings about the size or scope of the bureaucracy. But he dismissed the $125 billion savings proposal as “unrealistic” and said the business executives had failed to grasp basic obstacles to restructuring the public sector.

“There is this meme that we’re some bloated, giant organization,” he said. “Although there is a little bit of truth in that . . . I think it vastly overstates what’s really going on.”

“We will never be as efficient as a commercial organization,” Work said. “We’re the largest bureaucracy in the world. There’s going to be some inherent inefficiencies in that.”

Frank Kendall III, the Pentagon’s chief weapons-buyer, did the same saying the cost savings estimate was nothing more than “a ballpark, made-up number.”

“Are you trying to tell me we don’t know how to do our job?” he said, according to two participants in the meeting. He said he needed to hire 1,000 more people to work directly under him, not fewer.

“If you don’t believe me, call in an auditor,” replied Klepper, the board’s restructuring expert. “They’ll tell you it’s even worse than this.”

In an interview, Kendall acknowledged he was “very disappointed” by the board’s work, which he criticized as “shallow” and “very low on content.” He said the study had ignored efforts by his agencies to become more efficient, and he accused the board of plucking the $125 billion figure out of thin air.

“It was essentially a ballpark, made-up number,” he said.

Still, Kendall knew that lawmakers might view the study as credible. Alarmed, he said, he went to Work and warned that the findings could “be used as a weapon” against the Pentagon.

“If the impression that’s created is that we’ve got a bunch of money lying around and we’re being lazy and we’re not doing anything to save money, then it’s harder to justify getting budgets that we need,” Kendall said.

Of course, while every effort was made to hide this $125 billion in “made-up” cost savings, we suspect there may be some in the incoming administation that may like to dive a little deeper. 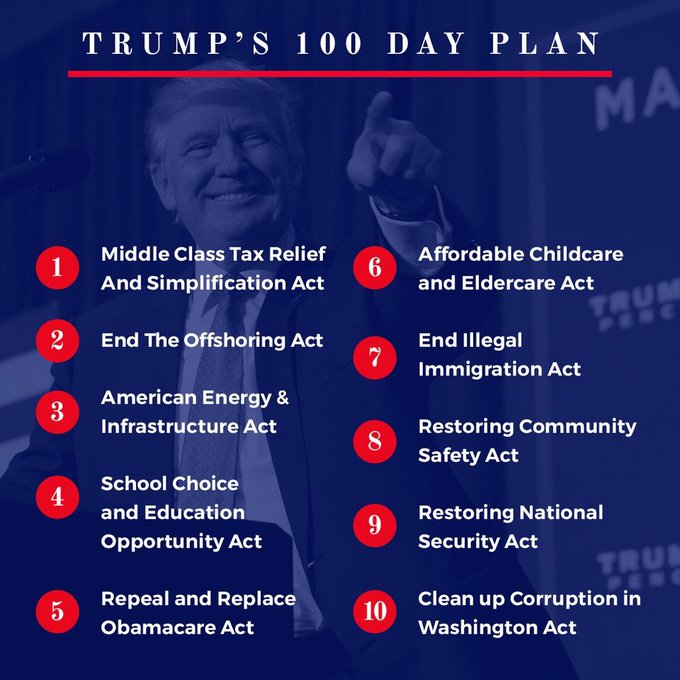 My contract with the American voter will restore honesty, accountability & CHANGE to Washington! #DrainTheSwamp