Source: Stillness In The Storm

Social media censorship has been rampant for years. Since the 2016 election big tech companies like Facebook, Twitter and Google have shadowbanned or deleted pro-Trump posts, QAnon content, and natural health treatments. But due to recent developments, censorship is being lifted. In the past 24 hours, four different articles were uncensored that were damaging to the Deep State. In addition, QAnon searches have exploded on Google, and Pizzagate related conspiracy images are now able to be found on google images. What’s happening?

Stillness in the Storm has been sharing information for over 7 years on this site, revealing spiritual teachings, natural health treatments, cabal corruption, occult secrets, and an ocean of other topics that dismantle the false reality of the powers that be.

The control systems use propaganda and mass media to feed you lies that ultimately are designed to control your mind, your will, and your spirit.

I became aware of this insidious agenda after waking up in 2010 when I discovered Dr. Max Gerson’s suppressed cancer cure. Once I realized that the belief that cures do not exist was the conceptual block that was preventing people from grasping the life-saving power of the truth, I knew that the solution was to bravely speak the truth, with integrity and compassion.

Soon after the 2016 election, big tech censorship efforts ramped up considerably. Major altmedia sites and social media pages were taken down, some with over 10 million followers.

But since the coronavirus outbreak was declared a pandemic, clues suggesting a shift has taken place began to surface. We reported on these shifts several days ago, and those articles were swiftly censored on Facebook.

Here are the posts that were censored:

Will the Alliance Attack the Deep State with False Flags?

4 Ways Coronavirus is Helping to Takedown the Deep State

The Storm Is Here! On the 7th Birthday of Stillness in the Storm, Let’s Bring the Stillness

Russiagate is OFFICIALLY DEAD: FISA Court Rules They Were Misled by FBI About Russiagate

Before I say what that is, you need some context.

The content we post on this site has been censored for years. Usually, our posts are removed or censored without any notice at all. About a year ago, social media companies started giving notices that posts were being removed. This new policy allowed for people to contest the decision. And I would take the time to contest every censored post. Facebook never responded or removed censorship on a post.

All this changed earlier today when the five posts listed above were spontaneously uncensored. Here are the screenshots to prove it. What the hell is going on?

Did you notice the date? March 17th…

Have you seen any of your posts uncensored recently? Let us know in the comments

But wait, the good news isn’t over.

Rachel Chandler is a fashion designer by trade, connected to the Pizzagate conspiracy. Like Ghislaine Maxwell, she’s a female child handler who is allegedly involved in child-sex trafficking.

Conspiracy researchers noticed that Google Images were being censored when searching for Chandler. Recently, it appears Google has lifted the censorship.

Check the search out for yourself. Here’s a screenshot.

All of these Pedogate connections were censored at one point, but now appear to be accessible.

I did a few other searches that I know from memory were censored. They also appear to be uncensored now.

James Alefantis Instagram was also a heavily censored search term which now appears to be uncensored.

To be clear, it’s hard to make a valid comparison as I can’t access the censored version of Google Images to know what showed up before. But going off memory, and others observing similar changes, there’s a compelling case to be made that some aspect of censorship with respect to Google Images has changed.

Jordan Sather is a health and conspiracy researcher who has become the punching bag of the deep state-controlled media. He and I have had discussions about the obvious censorship and smear campaigns.

Sather correctly reported that MMS can be used to treat pathogens, like coronavirus. At which point, the media falsely claimed he was telling people to drink bleach, which he never did.

Sather recently noticed that the searches for QAnon have exploded, as reported by Google Trends.

Some sort of major shift has taken place. 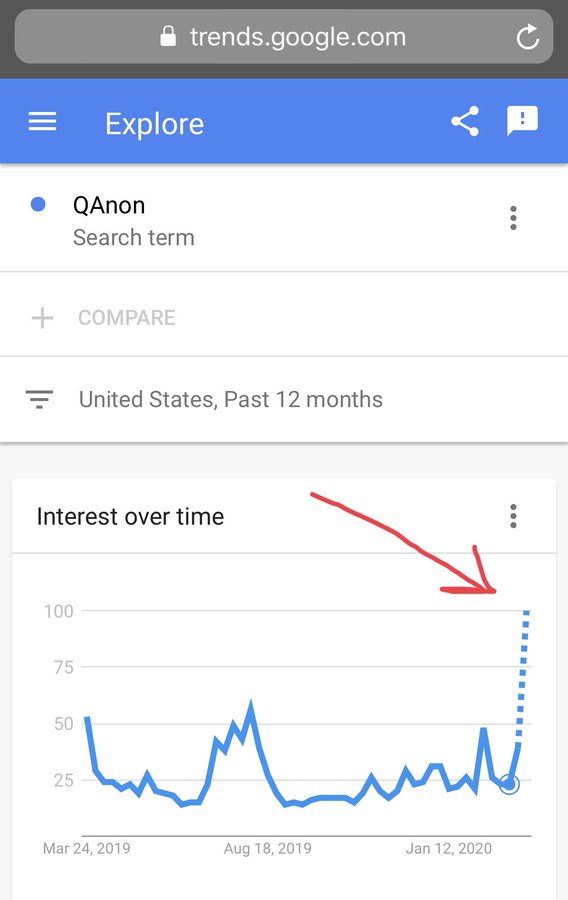 1,770 people are talking about this

I went to trends myself to check if the results are that striking, and they are.

Look at the results yourself here.

So what’s going on?

Well, as many have been claiming, the coronavirus pandemic might just be an alliance takedown operation.

As we reported above in the article 4 Ways Coronavirus is Helping to Takedown the Deep State, globalist schemes and agendas are being thwarted.

The fact that the coronavirus has almost shut down the entire planet, but is one of the least deadly pandemics in history leaves many wondering… is this a cover for something else?

In another article recently uncensored—Trump Pushes For The Biggest Emergency Economic Stimulus in History — Mass Arrests, NESARA, Financial Reset Initiated?—we talked about a man who claimed to have a conversation with a JP Morgan employee who said all of this is a cover for a global financial reset and mass arrest of deep state actors.

22.3K people are talking about this

And then there’s the recent statement made by the Irish Prime Minister who said: “This is the calm before the storm.”

The storm is a term used by QAnon referring to the time when the deep state takedown operation will go into an active phase. Is this the storm we’re seeing now?

Prepare for the Storm Anons

They fear an awake public. Each Q Proof proves our strength too. Thank you, Q and Q+!

You have come far, Anons (Patriots).

Prepare for the storm.

Remaining skeptical about all this seemingly positive news isn’t an unreasonable reaction. But denying the reality of what’s happening in favor of paranoid fears isn’t healthy either.

As a long time researcher and proponent of the restoration of the rule of law via calculated and strategic efforts, I’ll share that I have never seen so many evidence-based signs of good change.

Should we sit back and wait for the cavalry to arrive? No. There’s much work to be done.

Now more than ever we need balanced, rational, compassionate truth-sharers to spread this good news to help give hope to those who’ve lost it. And we need those who are willing to carefully discuss these recent developments with the unaware so that they can begin to see what’s happening. Such discussions need to be logical and fact-based, not emotionally charged with a cultish zealotism.

What signs have you seen that a shift is indeed taking place?

Let us know in the comments!

The preceding is a Stillness in the Storm original creation. Please share freely.

Justin Deschamps has been a truth seeker all his life, studying physics, psychology, law, philosophy, and spirituality, and working to weave these seemingly separate bodies of information into a holistic tapestry of ever expanding knowledge. Justin is a student of all and a teacher to some, sharing what he has discovered with those who are ready and willing to take responsibility for making the world a better place. The goal of his work is to help himself and others become better truth-seekers, and in doing so, form a community of holistically minded individuals capable of creating world healing projects for the benefit of all life—what has been called The Great Work. Check out his project Stillness in the Storm to find some of his work. Follow on Twitter @sitsshow, Facebook Stillness in the Storm, and minds.com.

Like our work? Support this site with a contribution via Paypal, cryptocurrencies, or Patreon.

This article appeared first on Stillness in the Storm.

This article (Did the Alliance Take Back Social Media? Censored Posts Are being Uncensored | The Storm) originally appeared on StillnessintheStorm.com and is free and open source. You have permission to share or republish this article in full so long as attribution to the author and stillnessinthestorm.com are provided. If you spot a typo, email sitsshow@gmail.com.

Stillness in the Storm Editor: Why did we post this?

The preceding information is an update from one of the many alternative media persons driven to help humanity by providing important information. Updates of this sort, as cursory as they are, help individuals feel connected to the greater works taking place at this time as well as providing a personal glimpse into the mind of a content creator. It also serves to humanize such individuals and reveal to the public that alternative media is largely populated by people that work long hours providing information usually for free or for little financial compensation.