There’s still much to be discovered under the Egyptian sands. A lot of cat people statues mostly, if recent discoveries are to be any indicator. Just a month after a sphinx in the style of the well known Great Sphinx of Giza was reportedly discovered, yet another sphinx statue has been found, according to the Ministry of Antiquities. While this newly discovered sphinx isn’t as massive as the sphinx of Giza, it’s remarkable in how well preserved it is and, unlike the claimed second great sphinx, there’s actually pictures of this one.

The sphinx was discovered during a preservation project at the temple of Kom Ombo in Aswan during efforts to protect the temple against damage from groundwater erosion.  While excavating the temple, archaeologists found an incredibly well preserved sandstone sphinx buried in the sands that they believe comes from the Ptolemaic period of Egyptian history, which lasted from 320 BCE to 30 BCE. 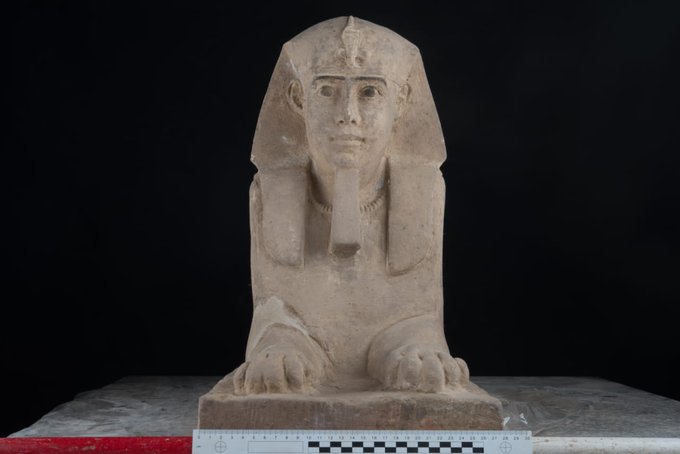 Egyptian archaeologists have discovered a new sandstone sphinx in the southern city of Aswan that likely dates back to the Ptolemaic era. https://www.cbc.ca/1.4826331

Egyptian archaeologists draining water from a temple in the southern city of Aswan have uncovered a sandstone sphinx likely dating to the Ptolemaic era.

One of the more interesting things about this sphinx is the face. This slightly quizzical and oddly comforting cat person, head slightly askew, looking like the least terrifying temple guardian imaginable. If sphinxes didn’t by default sit so firmly in the uncanny valley, it would be adorable. In contrast to the great sphinx, which, despite the erosion, looks rather intimidating and much more like a guardian of something, this Ptolemaic sphinx might offer a more complex look at the character of the sphinx in Egyptian mythology, or show how the mythology had changed by the time the Ptolemaic dynasty of Macedonia had replaced the Egyptian Pharaohs of old.

The Ptolemaic dynasty was the last ruling family of ancient Egypt, before the Roman empire swept in and did the Roman thing—see: Cleopatra. An insultingly brief history of the fall of the Egyptian empire goes like this: for thousands of years Egypt, was a powerful and independent monarchy. This is when many of the icons of ancient Egypt—the pyramids, Ramses II, King Tut, etc—were around. Then, around 671 BCE, the Assyrians came in and conquered Egypt. They left some Pharaohs in charge, who then, with the help of Greek mercenaries, kicked the Assyrians out and almost won back the glory of old. Then the Persian empire came from the east and said “Nah, that’s ours.” Then, Alexander the Great came out of Macedonia said “Excuse me, but I believe you’re holding my Egypt.” Being that Alexander already owned a solid chunk of the known world, it was probably true and the Persians let Egypt go without a fight. Then Alexander died and rule of Egypt passed to one of his generals, Ptolemy. He called himself Pharaoh and the Egyptians said “Sure.” Ptolemy’s dynasty would rule for roughly 300 years before Rome decided it was their turn. So it goes.

It’s interesting to see how the iconography of Egypt remained throughout those periods of turmoil. Even after almost 400 years of getting passed around like a hot potato, the sphinx remained an important icon in Egypt. It didn’t remain unchanged though. Like much of the Ptolemaic period, you can see the Hellenistic influence creeping in and merging with with the traditional Egyptian style. Let it be a lesson to you if you’re ever trying to do some conquering of your own: don’t change the symbol, just subvert it.