A quartzite colossus possibly of Ramses II and limestone bust of Seti II have been discovered at the ancient Heliopolis archaeological site in the Matariya area of Cairo.

Archaeologists working under difficult conditions in Cairo have discovered an ancient statue submerged in mud.

A joint German-Egyptian research team found the 8-meter (26-foot) quartzite statue beneath the water level in a Cairo slum and suggests that it depicts Ramses II,according to Reuters.

The team was working at what was once Heliopolis, one of the oldest cities in ancient Egypt and the cult center for the sun god.

Khaled al-Anani, Egypt’s antiquities minister, posted on Facebook that one of the researchers who found the statue called it “one of the most important archaeological discoveries.”

Anani also spoke to Reuters at the site of the statue’s unveiling. Here’s more from the wire service:

“The most powerful and celebrated ruler of ancient Egypt, the pharaoh also known as Ramses the Great was the third of the Nineteenth Dynasty of Egypt and ruled from 1279 to 1213 BCE. … His successors called him the ‘Great Ancestor.’

“On Thursday, archaeologists, officials, local residents, and members of the news media looked on as a massive forklift pulled the statue’s head out of the water.”

Egyptian workers look at the site of a new discovery by a team of German-Egyptian archaeologists in Cairo’s Matariya District on Thursday.

The identification of the newly discovered colossus as the famous Ramses II is not yet confirmed, as Anani explained on Facebook:

“Dr. Ayman Ashmawy, the head of the Egyptian team, indicated that they are going now to complete the research and excavation work of the remaining sections of the statue to confirm the identity of its owner. On the discovered portions there is no inscription found that would make it possible to determine which king it is. But its discovery in front of the gate of the temple of Pharaoh Ramses II suggests that it is likely him.”

Ashmawy and Dietrich Raue, of the University of Leipzig, have been working in ancient Heliopolis for more than a decade under trying conditions, as the American Research Center in Egypt explained in 2015:

“Heliopolis once stood at the centre of the ancient Egyptian sun-cult, a core element of ancient Egyptian religion for more than three millennia. Today the site is seriously threatened by new construction and a rapidly rising water table. Eight meters of domestic and industrial waste as well as building rubble have been dumped on the site in the past four years. Added to this bleak scenario is the fact that the level of the water table on the site has risen alarmingly, and continues to do so.”

As of 2015, ARCE explained, the archaeological items in Heliopolis were submerged in 1 1/2 to 3 feet of water — a “most challenging environment” for archaeologists to work in, ARCE writes.

The discovery of a forgotten, submerged statue of Ramses II brings to mind one of the most famous poems in English literature — albeit substituting muck for desert sands. 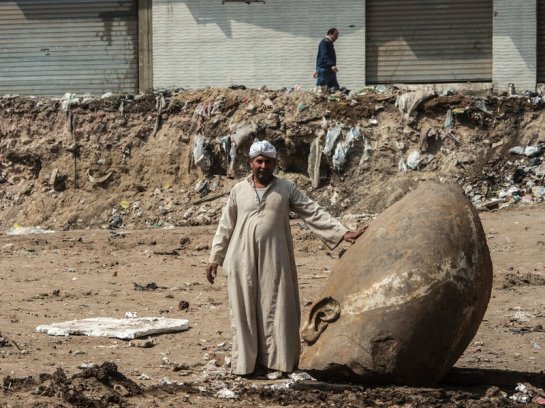 An Egyptian worker stands next to the head of a statue at the site of a new discovery by a team of German-Egyptian archaeologists in Cairo’s Matariya District.

Ramses II was known to the Greeks as Ozymandias. Today, that name is most familiar thanks to a sonnet on hubris and the implacable passage of time, by Romantic poet Percy Bysshe Shelley:

I met a traveller from an antique land,
Who said—”Two vast and trunkless legs of stone
Stand in the desert. . . . Near them, on the sand,
Half sunk a shattered visage lies, whose frown,
And wrinkled lip, and sneer of cold command,
Tell that its sculptor well those passions read
Which yet survive, stamped on these lifeless things,
The hand that mocked them, and the heart that fed;
And on the pedestal, these words appear:
My name is Ozymandias, King of Kings;
Look on my Works, ye Mighty, and despair!
Nothing beside remains. Round the decay
Of that colossal Wreck, boundless and bare
The lone and level sands stretch far away.

That poem is widely believed to have been inspired by a broken statue of Ramses II that is now, like many priceless Egyptian artifacts, in the possession of the British Museum.

The newly discovered statue won’t be traveling nearly so far. Once restored and its identity confirmed, it may be placed at the entrance of the Grand Egyptian Museum, which is expected to open in Cairo in 2018.